Anxiety is something that may affect many of us throughout our lifetime. It is estimated that almost 24% of Canadians will experience some form of anxiety in their lifetime 1. Anxiety may be due to several different reasons, and there are many different types of anxiety that people may experience, these include social anxiety disorder, panic disorders, anxiety due to substance use or other medical conditions and generalized anxiety disorder, just to list a few. It is something that affects the way patients think, feel and act in society. It is a condition that is expressed in many different ways, which can be shown and expressed physically, psychologically and functionally. Physical signs and symptoms include: insomnia, loss of energy, palpitations, sweating, muscle tensions, tremors, shaking, nausea and vomiting, “butterflies” in stomach and stomach pain. Psychological signs and symptoms include fear, worry, restlessness, poor concentration and irritability. Functional signs and symptoms include a decrease in productivity, social isolation away from others and poor coping skills 2.

There are some known socioeconomic causes of anxiety. These include a low level of education, isolation, a traumatic life event and lack of parenting, or over protection from ones parents 3. Family history and having a personal history of different types of anxiety disorders are also risk factors. Females are more likely than men to have anxiety as well 3, but this could also be due to the fact that females are more open and willing to talk about mental illnesses when compared to men.

Anxiety is a response to a certain situation. Becoming “alert” and having motivation to get up and ready to go is a part of the fight or flight response, which is a natural human instinct. However, with anxiety this danger or threat causes an overwhelming response, and this response results in impairments of daily functioning and results in a poor quality of life.

From a physiological perspective, the parts of the brain that are thought to be involved in anxiety disorders include the locus coeruleus, which senses the fear; the amygdala, which assesses the fear; the hypothalamus, which decodes information being relayed to it to from the amygdala; and the hippocampus, which is involved in memory 2. Several theories are proposed for the cause of anxiety from a neurological perspective. These include an excessive release of norepinephrine from the locus coeruleus and amygdala, which is a result of their over activity within the brain 2. Others include an over activity of the hypothalamus, which results in the release corticotropin releasing factor (CRF) 2, downstream effects of this is a excessive release of cortisol, which is an important component of the stress response. Lastly, it is proposed that a decrease in serotonin could also play a role in anxiety because serotonin helps regulate the norepinephrine and CRF levels within the brain 2.

In addition, there are some known mediation causes of anxiety as well. Some common medications that may cause anxiety include Salbutamol, Synthroid, Caffeine, and ADHD medication such as Adderall and Ritalin.

Moreover, your physician may use special monitoring scales, which are completed by you in order to assess your progression of anxiety or the effectiveness of the treatment that is being used to treat your anxiety. Table 2 lists some common self-administered tests that are used in practice.

The figure (figure 1) below is an example of the GAD-7 Scale, and Table 3 shows the interpretation of each score.

Cognitive behavioral therapy (CBT) plays an important role in those who have anxiety, and it should always be used alongside those who require pharmaceutical treatment as well 6. Stress reduction techniques such as breathing exercises and aerobic exercises are also useful ways with dealing with stress and anxiety. Caffeine in the form of coffee and teas are also very common in todays society, however higher doses of these could also lead to some of the anxiety that some patients have, hence a reduction in caffeine intake could also be beneficial for some6. Good sleep hygiene is also another great way to reduce anxiety as well 6.

CBT is usually used as a first line agent, however when the anxiety is moderate to severe, or if CBT was not effective, a trial of antidepressants can be used. Selective serotonin reuptake inhibitors and (SSRI) and selective serotonin and norepinephrine reuptake inhibitors (SNRI) are the mainstay of treatment. The reason for this is because they have a higher tolerability and lower side effect profile when compared to other antidepressants like the tricyclic antidepressants (TCA). Unlike depression, where one may see improvement in their symptoms within two to four weeks, the timeframe for symptom improvement for anxiety takes up to eight weeks, and in some cases may even take up to twelve weeks before symptoms of anxiety start to improve6. In some cases, your physician may prescribe benzodiazepines to help with anxiety. For people who have an acute onset of anxiety, the benzodiazepines may be effective for them. In other cases, the benzodiazepines may be used until the antidepressants have a full effective in the treatment of anxiety. In both cases, the benzodiazepines are used for the shortest period possible due to the possibility of dependence and abuse 6. Figure 2 shows an approach that your physician or other healthcare providers may use when helping you deal with your anxiety. This algorithm was taken from the Compendium of Therapeutics

It is important to note that this is just a general approach. Your physician and healthcare team may do something different other than what it listed in this algorithm depending on several factors, including what kind of anxiety you have, the severity and other considerations such as cost. Once an effective medication and dose is determined, it is recommended that it be used for a minimum of one year before discontinuing the medication.

The following will go only into first line agents for each type of anxiety disorder. A full list of treatment options, including second and third line agents can be found in the Compendium of Therapeutics 6. Second line agents for most anxiety disorders consist of TCA’s such as imipramine and clomipramine. Third line agents consist of monoamine oxidase inhibitors such as phenelzine and tranylcypromine and second-generation antipsychotics such at ripseridone, olanzapine and quetiapine. Benzodiazepines will also be briefly touched upon considering that they are still regularly prescribed for some conditions that give patients a lot of anxiety (examples include dental procedures and flights), however their long term use is something that is becoming phased out.

CBT is one of the most effective treatments for generalized anxiety disorder, however having access to CBT can get expensive, or may be harder for some patients to have access to in smaller communities. SSRIs and SNRIs are the first line treatments for when it comes to treating generalized anxiety disorders, which can be found in table 4A and table 4B, respectively. One drawback to the use of SSRIs and SNRIs is that it usually takes eight to twelve weeks to have an effect on the patient6. Because of this, another first line agent, pregabalin, is usually recommended because it has a faster onset of action and patients start to notice improvements within one week7. Refer to table 4D for dosing of pregabalin.

Social anxiety disorder is one of the more common types of anxiety that people may face. It results in people looking shy in front of others, or them avoiding social situations all together, such as social gatherings, or having to speak in front of larger groups of people. SSRIs and venlafaxine are the first line agents for treating social anxiety disorder, which can be found in table 4A and table 4B. Another first line agent is pregabalin, however a higher dose is usually required, which results in more side effects (with sedation being the biggest one), hence it is usually used when SSRIs and SNRIs fail. A third line agent that is commonly prescribed for those who have stage fright, or a fear of public speaking is propranolol or atenolol (refer to table 4E). This is usually taken 30 minutes prior to the anxiety causing event, and has been shown to be effective for those with the fear of public speaking or stage fright.

Some studied have shown that lavender taken orally may help with anxiety. There is evidence showing that lavender either taken orally as capsules, liquid and oil have resulted in a decrease in anxiety and have helped with sleep and in some cases depression as well10. Other options Ashwaghandha, which is a natural herb. Studies have shown that this also helps with stress and anxiety to a certain extent11. Another option as a natural product that is getting more attention in recent years is Rhodiola rosea for generalized anxiety disorder. A pilot study had shown that when patients were diagnosed with generalized anxiety disorder, the use of Rhodiola rosea 340 mg daily for 10 weeks resulted in a decrease in anxiety12. Though these studies show that natural products are able to decrease anxiety, stress and depression, it is important to note that there is a lot of variation in the products that were used. Moreover, the sample sizes in these studies were relatively small and having a larger sample size would result in more statistical power for these studies involving natural health products.

Looking for a new naturopathic doctor?

Dr Kate is working at Sina and is accepting patients for general naturopathy consultation, IV nutrient therapy, PRP/PRF, and microneedling.

NOTE: We offer direct billing. As such, if you have an extended insurance, you may not need to pay for your visit and we bill the insurance company directly. 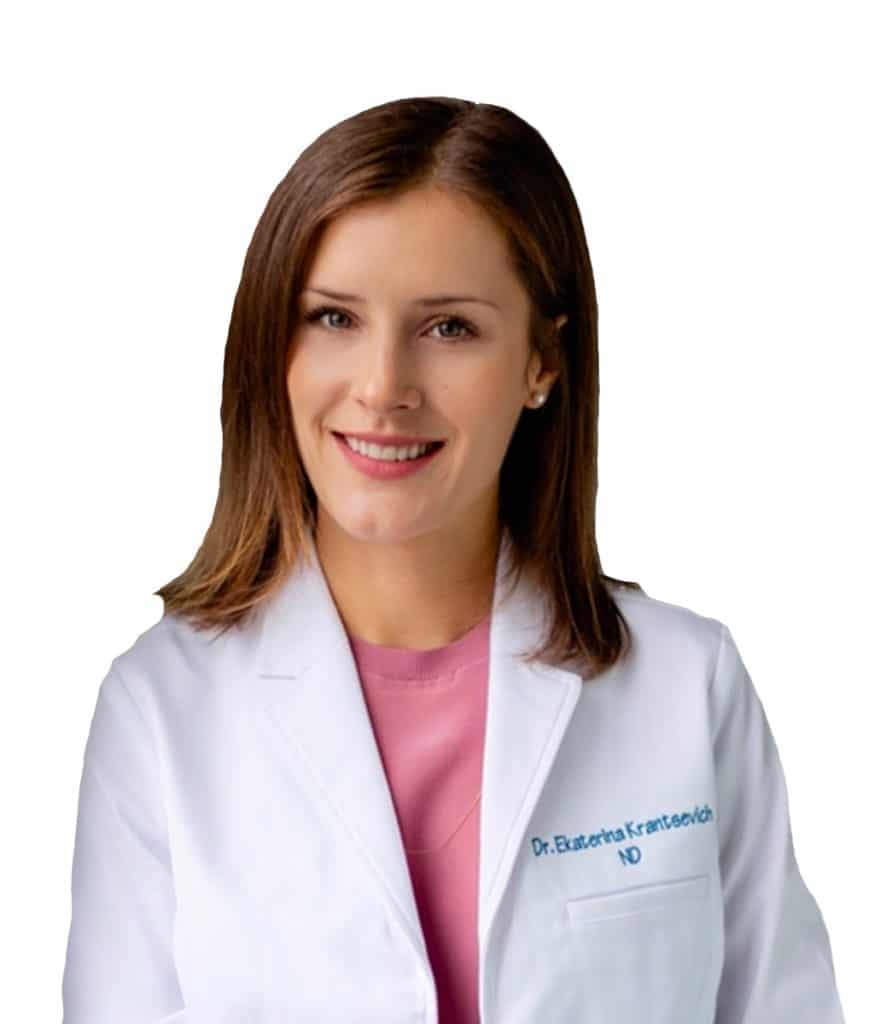